Saturn Apartments is a character-driven sci-fi slice of life set in a future where Earth has become a nature preserve. Humanity now lives in a gigantic tube-like structure that forms a ring around the Earth, 35 kilometers up in the sky.

With a cast of colorful characters trying to make ends meet, life in this interesting environment is anything but dull. The artwork is breathtakingly detailed. Every page is a gift.

The story centers around a young boy named Mitsu and his job as a window cleaner. Five years ago—prior to the start of the story—Mitsu’s father disappeared during a routine window cleaning job. Now, following in his father’s footsteps, Mitsu aims to become the best window cleaner AND solve the mystery of what happened to his father five years ago.

Window cleaning is a dangerous job. It is also expensive. Only those who can afford to pay the price can get their windows cleaned.

The lower level windows are rarely—if ever—cleaned. They are blackened and no longer let in natural light. The lower level is a complex system of dark and cramped tunnels, failing systems, and limited resources. It is home to our main character and most of the Ring system’s population.

The rarely seen upper levels are home to the most elite residents and the shiniest windows.

But as systems in the lower level continue to fail, life on the ring system is suddenly threatened. And as Mitsu grows closer to realizing his dreams, things come to a dramatic tipping point. 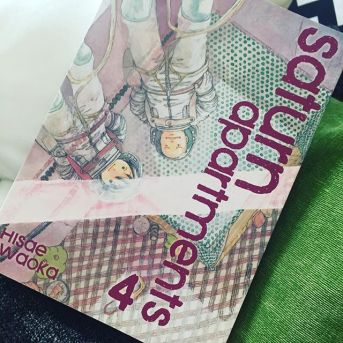 Incredible character development and out of this world artwork make this manga a must read.